Salvatore G. Gangemi was recently selected for inclusion in The Best Lawyers in America® 2011 (Copyright 2010 by Woodward/White, Inc., of Aiken, S.C.).
Mr. Gangemi’s inclusion will be listed in various publications, including New York Magazine in December 2010.

Since its inception in 1983, Best Lawyers has become universally regarded as the definitive guide to legal excellence. Because Best Lawyers is based on an exhaustive peer-review survey in which more than 39,000 leading attorneys cast almost 3.1 million votes on the legal abilities of other lawyers in their practice areas, and because lawyers are not required or allowed to pay a fee to be listed, inclusion in Best Lawyers is considered a singular honor. Corporate Counsel magazine has called Best Lawyers “the most respected referral list of attorneys in practice.” 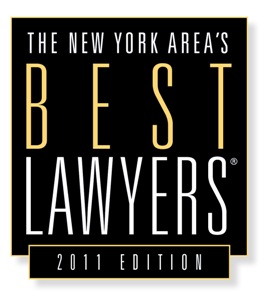 Search
ABOUT THIS BLOG
This blog focuses on employment law developments under federal and New York State law. Our goal is to address recent state and federal cases decided in New York, and to provide up-to-date information on legislative developments, particularly those affecting New York State and New York City. We hope this blog can serve as a resource for our clients and friends.
BLOG EDITOR

Salvatore G. Gangemi is a Partner in the Litigation Department of Murtha Cullina and a member of the Labor and Employment Practice Group. Sal advises clients with respect to state, federal and local employment laws, including the Fair Labor Standards Act, Title VII, Age Discrimination in Employment Act, Americans with Disabilities Act, Family Medical Leave Act, and New York State and City employment laws. Sal counsels clients on day-to-day issues involving workplace management and administration, including requests for reasonable accommodation for disabilities, for family and medical leave, and wage and hour issues. Sal frequently lectures on employment law matters, and at continuing legal education seminars. He has written extensively on employment law issues as well as other legal issues affecting individuals and businesses.